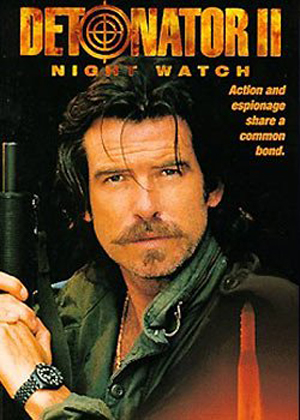 Welcome to Night Watch! Or Detonator II: Night Watch. Your glimpse of what might have been Brosnan’s career if he hadn’t finally landed the British super spy gig and become The Billion Dollar Bond. It is properly horrifying.

I was really excited to watch this movie for some reason. I love Brosnan and I love Alistair MacLean – how bad could it get when they got together? And to be honest, even though Night Watch has a distinctly made-for-TV feel to it, it’s only as bad as your average Lifetime movie, which is to say it’s watchable.

But from the first moment, as a fiercely mustachioed Brosnan runs towards the camera in tight fitting pants that keep getting tighter and skinnier as the movie progresses and long-ish hair that always manages to look greasy, something is very off. Let’s face it: despite his stellar work in movies like Evelyn, The Matador or The Ghost Writer, Brosnan’s USP is his looks and his ability to wear the shit out of a tuxedo. Both of which are wanting here. In fact, by the time the movie ended I was having fond memories of his dye job from The Noble House. I don’t know who Brosnan pissed off, especially in the costume department. Or did people really dress that way in the early 90s? Thank God I was just a kid.

Anyway, the plot takes us to Amsterdam where Rembrandt’s “Night Watch” has been stolen and a forgery put in its place. Mike Graham (Brosnan) is some kind of special ops agent on the brink of burnout after losing his partner during an extraction. Sabrina Carver (Alexandra Paul) is waiting for Baywatch to make her famous as the honorary non-bimbo brunette. They have, ahem, a history. Ooooooooh.

But what is supposed to be a low-stress case of art theft investigation, a little R&R for poor psychologically fragile Mike, suddenly turns violent and confusing with the introduction of a Hong Kong-based mastermind, busy inventing the means of world domination. World domination and art theft, I guess. There are also some ominous North Koreans thrown in for good measure because, you know, North Korea – boo! are you scared yet?

If you get your rocks off watching Brosnan dressed up as a cross between an American Civil War veteran and a stereotypical errand boy for the Italian mob (and let me tell you, it takes considerable talent to take the refined Mr. Remington Steele to that pass) or you like the kind of movie where the hero slides down a steep wall, dragging his fingernails all the while, only to show up with perfectly manicured nails at the end – find a copy of this movie stat!

Meanwhile, I will pray that I never have to watch Detonator I. Or will I?

Posted by Amrita on July 28, 2010 in Celebrity, Entertainment, Movies, Review