But what if this were to happen? Retouched for the new generation?

Amar Akbar Anthony, the story of three upper middle class Mumbai stoners (just look at those mugs!) who like to dress up in drag and play in a band. Kind of like Hedwig and the Angry Inch but without the castration.

Amar is the sensitive one, who comes up with dreamy songs about girls in sundresses, cranberry Smirnoff kisses, the existential angst of 30-year-old teenagers, soulmates and other random shit that the other two think is absolutely fucking genius but only because they’ve never listened to his lyrics when they were sober. Someday they will and boy, are they gonna be mortified about their repertoire. And then Amar won’t have any friends.

Akbar is the angry one. He’s an artiste but the world won’t let him be great so in the meantime he rails about the system to all the groupies he bangs and then strums the shit out of his guitar, often in keys and to tunes that have very little to do with whatever it is that the rest of the band is playing. He doesn’t know it but his bandmates are secretly laughing about him behind his back. If they weren’t so high, they’d have been pissed and beaten him bloody but they’re way too mellow to care. He’s going to be very depressed when he finds out. He might say as many as two cruel things to his mom that day.

Anthony is the self-professed player who “knows people”. He often tells whoever didn’t ask that he’d have left these two losers a long time ago but that whiny kid Amar and that funny one Akbar really know how to draw in the chicks. He’s been there, he’s done that and one day soon he’ll go someplace and do something that’s going to get him kneecapped. And that’s if he’s lucky. 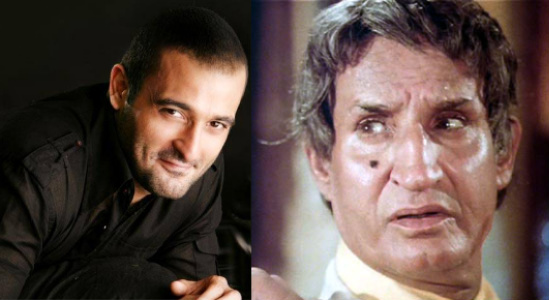 When the sinister Boom Box Bobby, an unsavory musician who hates Bollywood music, runs off with their demo tape and threatens to tell their mothers what really goes on in Akbar’s basement when his parents think he’s “practicing” unless they keep quiet, Amar, Akbar and Anthony must unite with their loved ones to fight his evil intentions.

Your butt is precious to me.

Hmm. I’d still rather have the old one, methinks.

Catch up on the all-new, all-awesome week of Khanna-0-Rama for more reasons why you shouldn’t mess with the original! Click on the badge to the right (thanks, VLoveMovies).

Posted by Amrita on May 5, 2010 in Celebrity, Entertainment, Movies